Mercy Aigbe, for the second time in a role missed the prestigious AMVCA awards, lots of speculations are surrounding her reasons, which she later took to her IG account to explain further.

She went ahead to explain she was on the set of a new movie, filming with Desmond Eliot and the circumstances were beyond her control.

‘I am not going to pretend that I didn’t see all the comments, all the tags, all the plenty DMs. I feel so loved, I was stuck on set, filming the series ‘palaver’ directed by Desmond Elliot. It pained me sha, but the show had to go on, super proud of all the divas that graced the red carpet, they all looked magnificent. Congrats once again to all the winners and all the nominees. Next year is almost here, and by God’s grace, we all will live to witness it. Thank you all for the love.‘

Rumours have it that the actress is still upset with the organisers of the awards, afters she was left out of the top ten most dressed list published by ThisDay newspaper in 2016.

Another point that makes this look true, was that Desmond Eliot who she said, she was filming with, attended the event surprisingly.

Her fans also took to social media to ask her why she missed the prestigious awards. 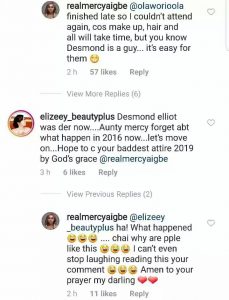 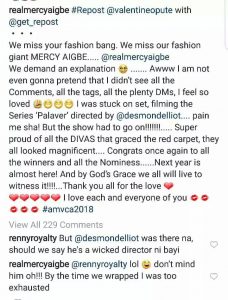